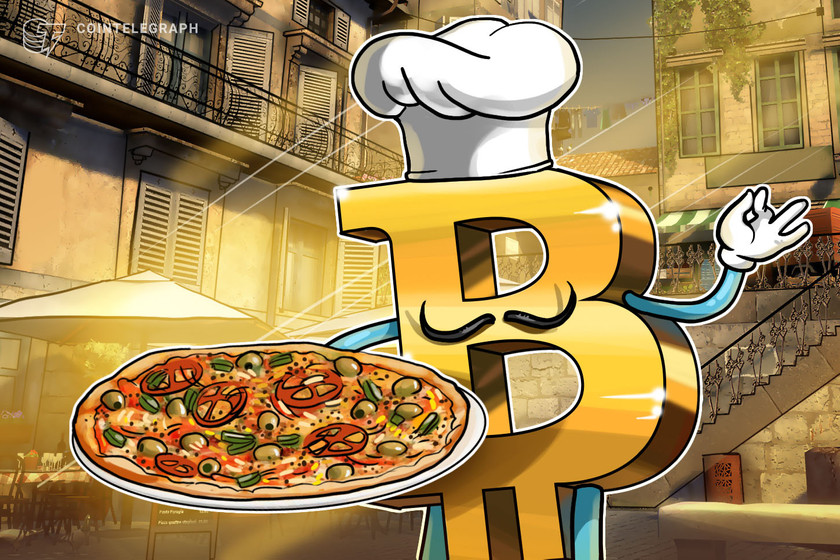 A guy who loves Domino’s is launching a pizza brand based on a Papa John’s event that doesn’t accept the crypto he espouses.

In an announcement on Twitter today, Pomp said his Bitcoin Pizza brand would be launching in ten U.S. cities beginning on Saturday, May 22. The start date coincides with the 11th anniversary of the first successfully documented commercial transaction of cryptocurrency for two Papa John’s pizzas — an event now known as Bitcoin Pizza Day. However, while Laszlo Hanyecz’s purchase of those pies in 2010 cost him 10,000 Bitcoin (BTC), Pomp’s venture currently does not accept crypto as payment.

Pomp, who is a well known fan of national pizza franchise Domino’s, said Bitcoin Pizza would only be offering 10,000 pies on its launch day to commemorate the historic BTC transaction. Pizza lovers can choose from a variety of pies with crypto-themed pun names, including Laser Eyes, Satoshi’s Favorite, Lightning Meat, Capital Greens, and No Keys, No Cheese.

The profits from the first week of sales will go to support small businesses — local pizza eateries — as well as the Human Rights Foundation’s Bitcoin Development Fund. Launched by the foundation in June 2020, the fund is a privacy-focused project aimed at supporting developers making Bitcoin a safer tool for activists and journalists around the world. As of April 15, the Bitcoin Development Fund has given away $746,000 in BTC and fiat.

Within a few hours of the announcement, “Bitcoin Pizza” was trending on Twitter in the United States. The venture generally received positive support on social media from big names including Daryl Morey, the president of basketball operations of the Philadelphia 76ers, Binance CEO Changpeng Zhao, and What Bitcoin Did podcaster Peter McCormack.

However, some people including Twitter user Joel Valenzuela and Banana Capital founder Turner Novak were quick to ask why Pomp was seemingly unable to accept BTC payments for the pizza. According to the checkout page on the website, only credit cards are accepted at time of publication.

You're not even accepting Bitcoin (or any coin for payments? How did you set back Bitcoin 11 years? Come on man!

A Bitcoin bull and crypto proponent, Pomp is well known for educating others in finance on BTC through his podcast. He has persuaded Jim Cramer, the outspoken host of CNBC’s Mad Money, to invest in crypto, as well as comedian Bill Burr and many others.

Cointelegraph reached out to Pomp, but did not receive a response at the time of publication.