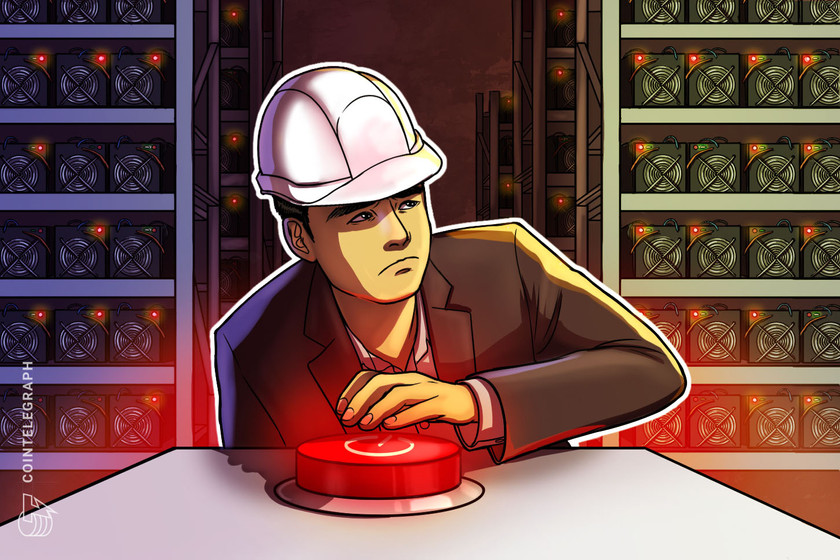 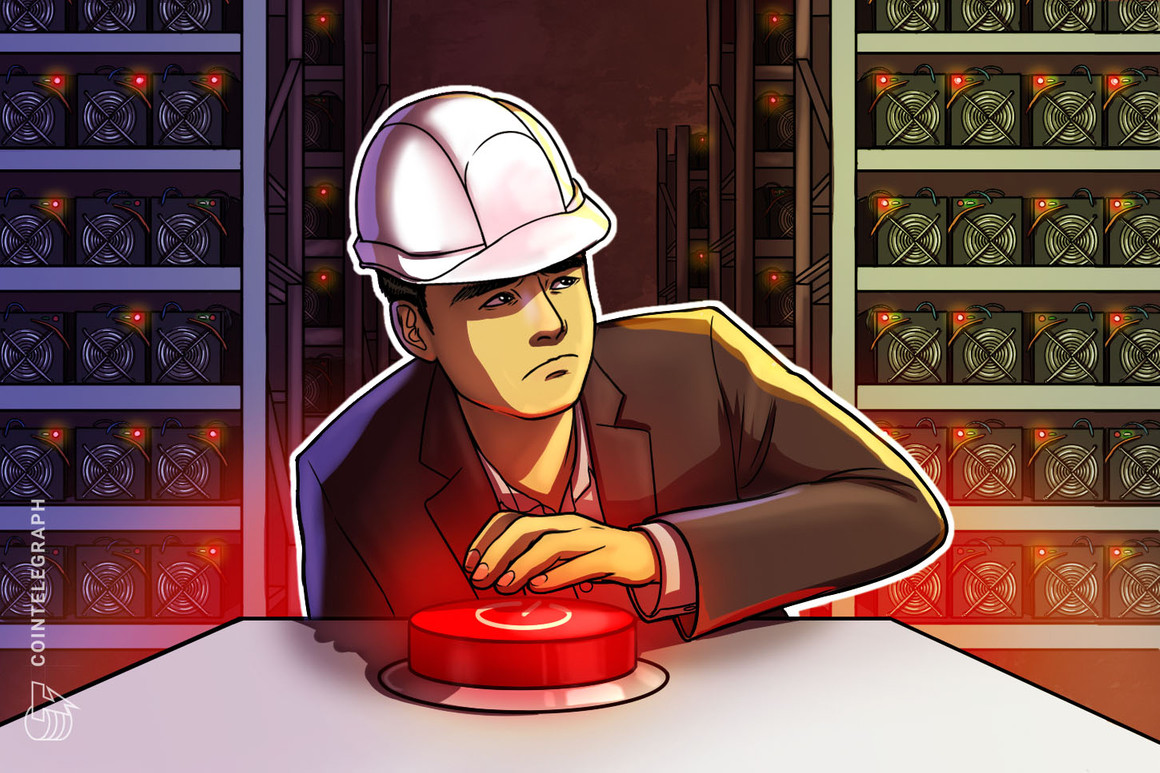 When it comes to China, few things are crystal clear, and the nation’s recent crackdown on crypto mining is no exception. The State Council’s Financial Stability and Development Committee reported on May 21 that it is curtailing Bitcoin (BTC) mining amid financial risk concerns, which prompted the South China Morning Post to proclaim that “China’s place at the centre of global bitcoin mining is fading.”

“We are seeing the cryptocurrency market enter a path to ‘de-China-isation’ — first on trading and now on computing power, based on a series of stronger steps taken against cryptocurrencies and Bitcoin mining last week by Beijing,” Wang Juan, associate professor on blockchain at Xi’an Jiaotong University and a member of the OECD Blockchain Expert Policy Advisory Board, told the publication.

But maybe not. Darin Feinstein, founder and executive chairman at Blockcap — one of the largest crypto miners in North America — isn’t absolutely convinced that Bitcoin mining is finished in China, the world’s current mining center. In 2017, China made a similar announcement, he told Cointelegraph, further explaining:

“After that announcement, another company I founded, Core Scientific, entered into multiple contracts with Chinese miners to help them relocate some percentage of their miners back to the United States. None of those deals ever came to fruition, and all those miners continued to mine in China to this day.”

Still, three mining companies — BTC.TOP, Huobi and HashCow — announced they were closing shop on the mainland, while China expert Bill Bishop reported in his newsletter “Sinocism” that the eight government draft measures taken against mining activities in the Inner Mongolia region were “harsh,” and “it is going to be much harder to think that this is just a passing crackdown and that things will return to normal relatively soon.” Other provinces and regions, including Sichuan and Xinjiang, might follow suit.

No one can be certain what is going on behind the curtain in China, as Feinstein notes, but it’s worth asking: What is the real impetus behind the latest (apparent) crypto mining clampdown, and why now?

Is it purely to ward off financial risks, as the state announced, or might something else might be involved, including energy/environmental concerns? Will China-based mining businesses now move offshore, and if so, where might new crypto mining centers arise?

Finally, is this another signal that energy-intensive proof-of-work validation protocols, the sort used by Bitcoin and other cryptocurrencies, are increasingly problematic in an ecologically anxious world?

A threat to “old systems?”

“Control over monetary policy and financial systems is important for a central government, and Bitcoin is a threat to that,” Ethan Vera, chief operating officer of Luxor Tech, told Cointelegraph in reference to the new mining restrictions, adding, “Bitcoin is clearly cementing its place in the world and proving itself as a valuable store of value for people globally. This threatens the old systems.”

Yu Xiong, associate dean international at Surrey University and chair of business analytics at Surrey Business School, cites environmental concerns as the number one reason for the crackdown. Countries like China, which have declared they want to become “carbon neutral” at some point in time — 2060 in the case of China — are now feeling increasing pressure “to stay away from emissions-intensive sectors.” Bitcoin mining is one sector that can be easily sacrificed “without too much cost at the national level,” Xiong told Cointelegraph.

Why now? “Bitcoin grew too fast recently and has impacted many investors’ behavior,” said Xiong, adding, “Governments normally want to see a sector grow reasonably rather than radically — so some action had to be taken.”

It might not necessarily be the end of mining on the mainland, however, in Xiong’s view. The sector could emerge later as a regulated industry. To put things in economic terms, “they already earned money in this round, so now they cash out, wait for the price to go down, then join again,” according to him.

“It is too early to tell the actual effects of the vice premier’s comments,” said Vera, adding, “We have seen a couple hundred megawatts of power requests cross our desk this week.” He further explained:

“Miners based in Inner Mongolia and Xinjiang have reached out to international providers to try to get their mining equipment out immediately. Some miners in Sichuan have begun looking to move some of their operations overseas to diversify geopolitical risk.”

Vera suggested that ecological concerns about the energy usage and carbon footprint of crypto mining may be something of a “scapegoat,” while Feinstein opined that the environmental question had some nuances. For instance, in the Sichuan region, “the majority of power is renewable, sourced from a large collection of hydroelectric plants running renewable energy. Those plants have massive excess energy during the Chinese rainy season,” with electricity costs close to zero.

Elsewhere, though, China uses vast amounts of coal, Feinstein continued. “I would assume that to meet their internal climate goals, the coal regions will face pressure to close,” while miners located where renewable energy sources are prevalent may face fewer restrictions. “But we have yet to see a comprehensive document come out, so it’s pure conjecture at this point.”

Winston Ma, adjunct professor at New York University School of Law and author of The Digital War: How China’s Tech Power Shapes the Future of AI, Blockchain and Cyberspace, told Cointelegraph that environmental concerns were, indeed, a large factor in the clampdown, and while hydropower — as used in the Sichuan region — is considered as clean energy, “the Chinese government has pledged to meet energy efficiency targets, which could still limit the expansion of high energy-consuming industries like crypto mining,” adding:

“Yes, carbon neutrality is a major consideration. […] Recent research by Chinese scientists noted that this emission output in China [from crypto mining] would exceed the total annualized greenhouse gas emission output of some smaller countries, such as the Czech Republic and Qatar.”

Feinstein, however, disputes the carbon footprint and energy consumption arguments — insisting they lack context. “The total energy produced in the world is 160,000 terawatts per hour of energy. This is all energy from every source. The Bitcoin network uses 120 TWh of that energy. That means, simply, that the Bitcoin network uses .00075 of available energy in the world,” or less than one-tenth of 1%.

Similarly, the carbon released “as a result of the energy used in plugging the machines into the grid power” is also less than 0.1%, and that number drops sharply as more mining rigs switch to renewable energy sources. Feinstein added:

“There are industries that are criminally responsible for destroying our environment and ecosystem, but this is not one of them.”

Could North America pick up the slack?

If China is indeed down-throttling crypto mining, will North America replace it as mining’s regional center — as some were suggesting even before the new restrictions? Who else might profit?

According to the Cambridge Center for Alternative Finance, Bitcoin currently consumes around 110 terawatts per hour per year, while Ethereum adds another 44.5 — according to Digiconomist — and this doesn’t even include other PoW cryptos, so if a significant portion of that gets shut down in China, it will have to find a new home. Says Vera:

“North America is primed in the mid-term to take a lion’s share of that power requirement but will not have the ability to take it all immediately. We expect significant growth in South America, the Commonwealth of Independent States region [e.g., Kazakhstan], and Northern Europe.”

But there are potential hindrances here, including the lack of infrastructure companies to supply the electricity needed to power the computers that validate crypto’s block transactions. “In terms of plugging those machines in, you need to have […] companies building enough infrastructure at a pace to accommodate those miners. Currently, the demand to plug in miners exceeds the available infrastructure,” Feinstein said.

“Kazakhstan and Canada are regions that Chinese miners are talking about these days for potential relocation,” adds Ma. But relocating may not be as simple as it sounds. “Chinese miners may have to deal with unfamiliar partners, unstable power supplies and unexpected new compliance costs. Adding on the relocation costs, probably only the biggest and most resourceful mining operators can make the exodus smoothly.”

“If the Chinese government cracked down on the ASIC manufacturers, then there would be a huge impact on the mining industry. Currently, Bitmain has a factory in Malaysia, and MicroBT has been exploring setting up a factory in Southeast Asia, and I would expect these companies to ramp up efforts overseas.”

Elsewhere, “Russia and Kazakhstan are preferred for shifting large quantities of old-generation miners due to lower power prices,” added Heller, “while North America is more suitable for new-gen units. The challenge right now in North America is a severe shortage of rack space for hosting miners.”

Taking the longer view, what does all this contention say about Bitcoin — and other cryptocurrencies that use energy-gobbling validation protocols? Is this a sustainable sector over the longer term? “While we don’t believe the crackdown in China has to do with the environment, we do think it’s a pressing issue in North America,” answered Vera, adding further:

“Western miners that are accessing capital markets for expansion must push towards renewable energy or carbon-neutral methods of mining in order to attract capital. Publicly listed mining companies are the first companies in the spotlight and must react as we saw with Greenidge purchasing carbon offsets and Marathon pivoting to Compute North from their Hardin site.”

Bitcoin can continue to grow, especially if all its mining pools move to renewable energy, Xiong told Cointelegraph. Indeed, the sector has the opportunity to be a shining example to other industries — i.e., “the first sector that achieves Zero Carbon.”

Elsewhere, Xiong wrote that “regulations and rules should be enacted as soon as possible to standardise bitcoin’s coin mining behaviour, and explicitly require that only renewable energy sources such as solar energy and hydrogen energy can be used for cryptocurrency mining.”

Is there still a long-term role for China?

All in all, have the recent events marked the beginning of the end of Chinese crypto mining dominance — estimated to be as high as 80% of the world’s capacity — though some put it lower?

“In the long term, nearly all of Chinese crypto mining rigs will be sold overseas, as Chinese regulators crack down on mining at home,” wrote BTC.TOP founder Jiang Zhuoer in a blog post, as reported by Reuters. “China will lose crypto computing power to foreign markets,” including European and United States mining pools.

Reflecting on the similar mining clampdown announcement by China in 2017, Feinstein told Cointelegraph: “I would predict a similar result this time. These miners will be mining in 2024 when we can expect another similar announcement. We will see certain countries banning Bitcoin and mining over and over again forever. If it was possible for a country to completely ban Bitcoin or Bitcoin mining, it would only happen once.”

But maybe the paradigm really has shifted. “We still believe that China will play a role in mining in the long term,” stated Vera. “But this event has fundamentally changed the way Chinese miners perceive domestic risk and will encourage international expansion.”