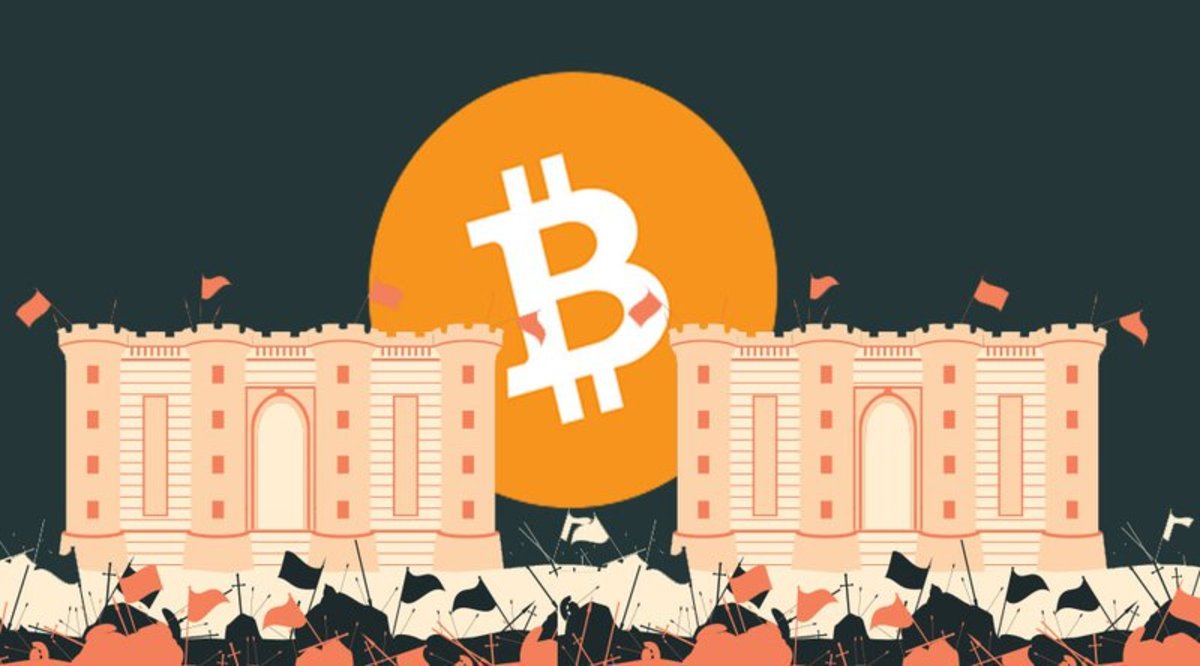 In this memo, I look into the original plebs — the plebeian class of ancient Rome. The bitcoin plebs are the solid core of the community, and the bitcoin rabbit hole has encouraged all of us to read history with fresh eyes. So I became curious — who were the plebeians, and are there lessons that us modern day plebs can learn from their experience?

Society in ancient Rome was split into two classes, the patricians and the plebeians, or plebs. Patricians were the aristocrats. Legend has it that the original 100 patricians were chosen by Rome’s founder, Romulus, at the founding of the city in 753 BC. These 100 men were chosen for their wisdom and merit, and the Senate acted as an advisory to the king. Interestingly, they also elected new Roman kings. So the king’s title was not hereditary; however the descendants of the patricians laid claim to their title, and thus there was a noble class.

The plebeians were everyone else. Free Roman citizens, they were nevertheless only one step above slavery. Plebs were farmers, laborers and bakers. Often a pleb would have a patronage relationship with a patrician, which constituted employment as well as a pledge to fight as a soldier in case war broke out. Plebs worked long hours, and lived in crowded apartment buildings with unsanitary conditions. Plebs were forbidden from holding political office, and from intermarriage with patricians.

As could be expected, over the course of generations the patrician class became entitled and corrupt. Upon the overthrow of the last Roman king in 509 BC, patricians had complete control of the Senate, as well as two consuls, analogous to the executive branches of United States government. So the patricians had total political control, as well as most of the wealth.

After 509 BC, the patricians passed onerous taxes and changed the structure of farming, in order to increase their profits. Under the monarchy, many plebeian farmers worked the public land owned by the king, and scratched out a meager living. When the patricians took control, they brought in slave labor which was obviously cheaper. Plebeians could get a small allotment of their own land, but were then forced to overwork it to make ends meet. This could lead to debt, and perhaps slavery in the case of default.

Another major problem which is hard to comprehend from a modern perspective:the patricians in the Senate would pass laws, but those laws were not codified or written down. A plebeian case before a magistrate could be decided in any unfair or arbitrary manner, with no recourse.

As an example of a specific case that caused angry mobs at the Roman Forum:

“Historian Titus Livy describes the story of how an elderly man with scars on his skin (this proved his dedication on the battlefield), pale and sick with leather, a long beard, clad in worn clothes, he fell to the ground in the Forum Romanum – the city center. There he told other citizens his story. As it turned out, he was an officer of the Roman army in the war against the Sabines. During the conflict his farm was burned and cattle were killed by an enemy army. Moreover, a tax was imposed on him that he was unable to pay. He had to take a loan, which he had nothing to cover. As a result, he lost his grandfather’s and father’s farm. Lack of further funds to pay the debt meant that he was imprisoned, threatened with death and scourged.”1

Taking a momentary aside, these practices sound remarkably similar to our modern world. Elites squeezing their workers by finding cheaper sources of labor, thus driving the working class into debt? Check. Laws that are either not written down, or comparably, laws that are impenetrable and filled with complex sub-clauses? Check.

The timeless and fundamental lesson to be drawn here would seem to be that the aristocratic class will always seek to maximize its advantage, until the point when the lower classes cannot bear any more. And this is what happened next, with the Conflict of the Orders.

The Conflict Of The Orders

In 494 BC, the plebeian class did something fairly badass. They simply walked out, and left the city of Rome congregating at the Mons Sacer, or “Sacred Mountain.” The plebs were the vast majority of the population, so the city’s economy ground to a halt. The patricians’ comfortable lives were upset with no one to cook their meals, wash their clothes, or care for their properties. And perhaps most importantly, the city of Rome could not raise soldiers for defense from neighboring kingdoms.

At Mons Sacer, the plebs built a defensive fort while emissaries negotiated between the classes. Advantaged with a position of strength, the plebs won several concessions. Many debts were canceled, and the plebs gained a political voice, with the tribune of the plebs. The tribune could convene the people’s assembly, to pass laws that applied to the plebeian class. And the tribune could veto decisions of the consuls or magistrates, which provided legal protection against the whims of patrician officials.

The plebeian secession has been likened to a labor strike. From a bitcoiner point of view, I find it most interesting that the plebs made use of the power of Exit — removing themselves from a corrupt situation, in order to exercise the power of Voice — exerting persuasion to make changes to the system.

Once the plebs returned to Rome, then there was harmony and common purpose between the classes, right? Hell, no! The patricians defended their political power at every step, and attempted to regain rights won by the plebs.

Following the first secession in 494 BC, the plebs continued to advocate for laws to be codified. This led to the establishment of the decemvir, or “council of ten,” in 451 BC. The council made ten tablets of laws.However all the officers of the decemvir were patrician, and they took the opportunity to reassert political power. In particular, the ten tablets restricted the powers of the tribune of the plebs.

“There was also outrageous behavior by officials. One of the tribune of plebs was killed for criticizing the decemvir. What’s more, a certain Appius Claudius Crassus – a plebeian representative coming from the patriciate … wanted to force a woman named Verginia to marry him (he used a trick here, forcing the girl’s father – Verginius – to enslave his daughter and selling her to decemvir). To prevent this, the centurion father killed his own daughter to preserve her honor and cursed the decemvir.”2

There were riots in the streets following the death of Verginia, and a second secession in 449 BC to Mons Sacer. The plebs gained further concessions, including the restoration of the tribune of the plebs, and the codification of law into the 12 tablets, with pleb representation. The secession also took steps toward the principle of “equality of all before the law.” The plebeian council could pass laws that applied to all citizens, regardless of class, though the patrician Senate retained veto power over these laws.

As an interlude, I must admit that the story of Verginia moves me in an emotional way. Plebs on bitcoin twitter make bold statements about freedom on a regular basis. But people of past ages have made unimaginable sacrifices to obtain freedom from tyranny.

The Conflict of the Orders would continue for more than 150 years following the second secession of 449 BC – it seems that people with political and economic privileges do not give them up so easily.

There were further secessions in 445, 342, and 287 BC.3 By the end of it, the plebs had won equality before the law. The pleb council could pass laws that applied to all Roman citizens, and the patrician Senate had no power of veto. For those us living in the modern West, this serves as a stark reminder.

We assume equality before the law as an obvious and unchanging principle; however the plebs of ancient Rome fought for over 200 years, inch by inch, to force it into reality.

There are several final thoughts to take from this historical drama. It’s interesting to note that, by the time of the final secession in 287 BC, several plebeian families had become wealthy and entitled, without much care for the fellow members of their class. This will surely happen to bitcoin plebs as well – I’m reminded of this mindset every time I see bitcoiners cheering on and advocating for institutional adoption. Will we, or our descendants, become the new corrupt elites in the future?

I have referred to other lessons throughout the text. The ideals of freedom from tyranny and equality before the law are great as a rant on Twitter. But ancient Rome plebs made serious sacrifices – sometimes bloody – for these ideals. Are we ready for what might come next?

And lastly, it’s quite interesting that the plebs used their power of Exit in order to effect change in the existing system. It was a geologically slow, tortuous process to force the patrician class to finally cede power. What do we wish as bitcoiners? In my opinion, government currency will always exist in some form. Do we wish to force change in government actions? Or will we instead create our own parallel system which can interact with governments when needed?

Time will tell, and no one knows what may come. I wish you well, bitcoin plebs. Let’s all continue to run our own nodes, increase our knowledge, and I hope to interact and do mutually advantageous business with you in the future.

3. When the Peasants Went On Strike: Ancient Rome’s Secessions

Life as a Plebeian in Ancient Rome

When the Peasants Went On Strike: Ancient Rome’s Secessions Of The Plebs

Conflicts of the Orders Patrician and Plebeian

Conflict of the Orders

This is a guest post by Wilbrrr Wrong. Opinions expressed are entirely their own and do not necessarily reflect those of BTC Inc or Bitcoin Magazine.